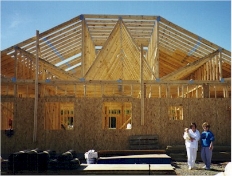 The land that Meadowlake sits on was purchased from the McGee family back in the mid-90’s. With much thought and prayer, Virginia McGee and her daughter, Pat McGee, became the charter members of the church.

In 1996, the first worship service for this church was held under a tent down near the road. On December 7, 1997, Meadowlake became the newest member of Charlotte Presbytery with 103 members.

In August of 1999, a bulldozer moved the first scoop of dirt and the process of building the Meadowlake Church began. On April 23, 2000 the very first Worship Service was held in our building.